Aarne Armas "Arska" Arvonen (4 August 1897 – 1 January 2009) was a validated Finnish supercentenarian.[1] He was the oldest Finnish man ever, and was also the last surviving veteran of the Finnish Civil War. He became the oldest living person in Finland on 5 December 2006 after the death of Elsa Tilkanen. Before his death at the age of 111 years and 150 days, he was the final surviving Finnish person born in the 1800s.

Aarne Armas Arvonen was born on 4 August 1897 in the city of Helsinki, to parents Heikki Arvonen and Mandi Salminen. His father worked as a journalist and trade unionist.[2] At the age of 14, his mother died, which lead to him spending much of his teenage years living on the streets and working various odd jobs, where he occasionally resorted to stealing food in order to survive.[3] He recalled encounters with famed Finnish writers Juhani Aho and Eino Leino while begging for money; the latter of whom he claimed to be far more charitable, while Aho never offered him any money.

After the Finnish Civil War began in 1918, Arvonen, who was still struggling to find work and living in a homeless shelter, joined the Helsinki Red Guard[4], a leftist paramilitary organization active during WW1. While serving as a security guard during the Civil War, he was captured by the Civil Guard and was imprisoned in the Tammisaari concentration camp, surviving a bout of the deadly Spanish flu while incarcerated.[5]

Upon being released from the prison camp, Arvonen was once again arrested for burglary. While in prison, he studied mathematics and astronomy, and also developed a keen interest in sculpting; this skill allowed him to find work as a carpenter upon being released. It was while he was employed at a furniture factory in Suonenjoki when he met his future wife, Sylvi Emilia Salonen. His interest in astronomy led to him becoming one of the founders of the Finnish astronomical organization Ursa. His other hobbies included painting and language, where he learned to speak French and English. In spite of his prior affiliations with socialist labor movements as a young man, his experiences as a prisoner of war and his later persecution for being associated with the Red Guard left him disinterested in politics throughout his later life.[6]

He and his wife had 2 daughters. After the death of his wife in 1938, Arvonen and his daughters moved to Järvenpää, Terhola district, where he built a house for them to live in, where he remained until 2005.

In 1997, Arvonen's 100th birthday celebration brought him media attention throughout Finland as one of the final surviving Finnish Civil War veterans, where he gave interviews about his experiences. By 2005, he was still living in the same house he built nearly 70 years prior, but was forced to move into a retirement home due to kidney disease and his failing eyesight. He became the oldest living Finnish person on 6 December 2006 upon the death of the 110 year old Elsa Tilkanen, and celebrated his 110th birthday himself the following August. By the time he had celebrated his 111th birthday in 2008, he was the final surviving Finnish person born in the 1800s. In spite of his extreme age, he remained very intelligent, lucid, and capable of engaging in conversations, although he was blind and required assistance in order to walk. He enjoyed listening to television and radio in his final years, keeping himself up to date on current world events.

Arvonen died of pneumonia on 1 January 2009, at the age of 111 years, 150 days.[7] He remains the third oldest validated Finnish person of all time.

Aarne Arvonen at the age of 7 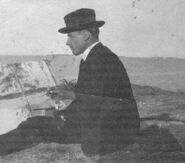 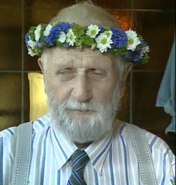 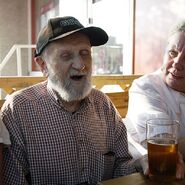 Aarne Arvonen in his later years