Abigay Peraza Montore was born in Tekax, Yucatan, Mexico on 5 November 1914, the youngest son of Jose Domingo Peraza and Filomena Montore. He had two siblings: Luis Fernando, and Ruben.

He moved to Merida as a child, when his parents had to leave the municipality in the south of the state after General Salvador Alvarado ordered the death of several of its inhabitants, because he considered them traitors to the Revolution.

He lived with the family of Serafina Medina. Later, he emigrated to the United States, wherehe lived for 16 years, and worked as a chef at the Sheraton restaurant in Pasadena, California.

He studied at the Hidalgo School and, later, at a commercial academy he studied stenography as a stenographer. Later, he studied Accounting and worked at Banco Comercial Peninsular, Banco Nacional de Mexico and Maderas de Tropico, in El Cuyo. He was also at the National Irrigation Commission (the forerunner of the Ministry of Hydraulic Resources), where he was a general storekeeper.

After that job, he decided to emigrate to the United States to have a better income. There he worked for 16 years at the Sheraton Hotel in Pasadena, California, starting with a job cleaning vegetables in the kitchen. Later, he was promoted to a salad chef.

When he returned to Merida, he opened the “Luminarias” ice cream parlor together with his wife, in the Miguel Aleman neighborhood.

He married Rita Maria Ramirez Buenfil, and had three children: Beatriz Aracely, Reina Leticia, and Jose Domingo. Rita Maria died in 2016 at the age of 89, after 68 years of marriage.

In 2016, he participated in the documentary Still Here (Aquí sigo) by producer and journalist Lorenzo Hagerman. He was the only Mexican who narrated his life experience along with others of more than 90 years from Costa Rica, Nicaragua, Japan, Canada, Italy, and Spain.

In early 2022, at the age of 107, Peraza Montore contracted COVID-19 during the coronavirus pandemic. He stayed in bed and under home treatment, but successfully recovered, making him one of the oldest known survivors of the disease.

Peraza Montore currently lives at his home in Miguel Aleman neighborhood, Merida, Yucatan, Mexico, at the age of 107 years, 243 days. 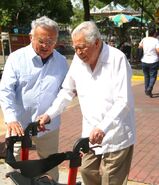