Adelina Evangelina Domingues (née Engargiola; 19 February 1888 – 21 August 2002) was a validated Cape Verdean-American supercentenarian who was once the oldest living person at the time of her death.

Adelina Domingues was born in Brava, Cape Verde (then a Portuguese colony) as the daughter of Francisco and Matilda Coehlo Engargiola. She married Jose Manuel Domingues in 1906 and moved to the US in 1907.

The couple settled in Massachusetts and had three children. She was widowed in 1950 and later moved to California. She moved into a nursing home in Spring Valley, San Diego, California in 1996.

She was posthumously recognized as the Guinness World Records' "world's oldest person" titleholder following the retraction of support for the Kamato Hongo claim from Japan. 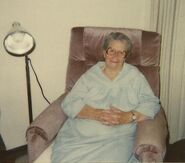 Domingues in an undated photo.