Agnes Kluckhenn (née Reid, formerly Hogarth; 1 April 1909 – 24 November 2019) was a British-born Australian supercentenarian whose age is currently unvalidated by the Gerontology Research Group (GRG). She has been the oldest known living person in Australia since the death of Wilhelmina Overall on 21 October 2018.

Agnes Kluckhenn, affectinately knows as "Nessie" was born in Glasgow, Scotland, United Kingdom, on 1 April 1909. She was the eldest of seven children. She worked as a nanny for a wealthy family in New York in the 1920s, where she witnessed the start of Charles Lindbergh’s solo flight over the Atlantic in 1927 and the collapse of Wall Street in 1929. She returned to Glasgow where she took a job with British Railway.

In the 1930s, she married Jimmy Hogarth. The couple migrated to Melbourne, Australia in 1947 and lived in the northern suburb of Coburg. Jimmy died in 1975, and she married Carl Kluckhenn in 1978. Carl died in 2005. Agnes had no children. She spent 20 years in Hampton, and another 28 years in Brighton. Her sister, Williamina, lived a few doors down from her apartment. In April 2019, Kluckhenn celebrated her 110th birthday. 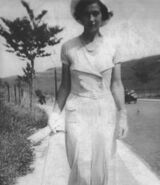