Agnes Lowe (née Matava; 23 October 1907 – 19 March 2020) was an American supercentenarian whose age is validated by the Gerontology Research Group.

Lowe was born in Collinsville, Connecticut, USA on 23 October 1907. She was the second daughter of Joseph and Catherine Matava. Her father died aged 39 from lung disease in 1914, and her mother died in 1917, leaving Agnes and her four sisters orphaned. They were split up and lived with different families.

Lowe married Wilfred Lawrence Lowe and had one daughter, Mary, whom she raised alone from the age of two. Lowe's obituary describes her husband as a "loving but troubled spouse". She worked for the Waterbury Pen Company, and after retiring she organised bus trips and did line dancing with a senior group. Lowe also survived a cancer diagnosis.

In her later life, Lowe was cared for by her granddaughter Kathy. She died in Shelton, Connecticut, USA on 19 March 2020 at the age of 112 years, 148 days. At the time of her death, she had four grandchildren and two great-grandchildren.

Agnes Lowe (third from right) in school photo in Collinsville, Connecticut in 1913 or 1914 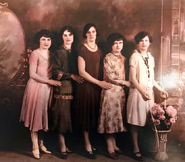 Agnes Lowe (aged 21; second from left) with her four sisters in Torrington, 1928 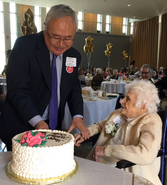 Agnes Lowe on her 109th birthday

Agnes Lowe on her 110th birthday