Aida Lomovasky Ferdman [Spanish: Aída] (5 April 1915 – 28 April 2020) was an Argentine centenarian who was the oldest known victim of the COVID-19 in Argentina at the time of her death.

Aida Lomovasky was born in Bahia Blanca, Buenos Aires Province, Argentina on 5 April 1915. Her parents were Isidoro and Fany Ferdman. She had five siblings. Her father moved to America, escaping the persecution of the Jews.

In the 1930s, she moved to Villa Ballester, Buenos Aires Province. She fell in love with the owner of the perfumery where she worked and lived a romance, although he never married or had children, but she lived together until he died.

She moved with her sister Berta to Beit Sion, Flores, Buenos Aires in 1996. She had no symptoms, but she tested positive for PCR, she was referred to the Hospital Espanol.

Aida Lomovasky died in Flores, Buenos Aires, Argentina on 28 April 2020 at the age of 105 years, 23 days. She is survived by two nieces Nora Lomovasky and Edith Lomovasky; and one nephew Carlos Lomovasky.

Aida Lomovasky with her parents Isidoro and Fany Ferdman. 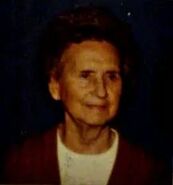 Aida Lomovasky in her later years.

Aida Lomovasky on her 101st birthday.

Aida Lomovasky on her 104th birthday.