Albano Ferreira Andrade (14 December 1909 — 29 June 2021) was a Portuguese supercentenarian who, together with his younger brother Alberto Andrade, was notable for being the oldest living pair of brothers in the world validated by Guinness World Records. He was the only living male supercentenarian who had been validated and was the second-oldest living person in Portugal, after Maria da Encarnacao Sousa at time of his death.

Andrade completed school until fourth grade, when old enough, he passed an entrance exam and became a teacher. Andrade gave up this career when he would have to move away from his family to a remote school. Despite retiring from teaching, Andrade kept up with reading and staying current with politics.

Andrade never married (by his own choice) and never had any children, choosing to live with family instead.

Andrade played violin from his youth, and was still able to play into his centenarian years, simmilar to his brother who played the saxophone in a philharmonic band.

When visited by The American Geriatric Society in 2013, Albano was still able to live independently and complete daily activites, he rarely took medications and had no health problems.

He became the oldest known living man in Portugal following the death of 108-year-old Manuel Rodrigues Horta between 21 and 23 August 2016.

In 2019, he and his brother were 109 and 107 years old respectively, and lived in Santa Maria da Feira, Portugal. Their combined age as of 2 April 2019 was an incredible 216 years, 230 days. Albano and Alberto were both born in their family home in Portugal, where they have lived their entire lives.

There was also a history of longevity in his family: his mother died at the age of 96 and his father at the age of 95. One of his nephews (the son of his oldest sister) died at 101 years old, and another one turned 100 in 2020.

Albano and Alberto with their mother 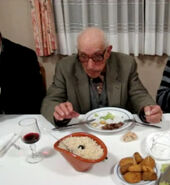