Alelia Murphy (née Stewart; 6 July 1905 – 23 November 2019) was an American supercentenarian who was the oldest known living person in the United States at the time of her death. Her age has been validated by the Gerontology Research Group (GRG).

Alelia Murphy was born as Alelia Stewart in Grifton, North Carolina, USA on 6 July 1905, one of 12 children born to John and Hattie (née Young) Stewart. She attended college in Grifton, before moving to New York in 1926 and marrying Furd Murphy on 7 October the same year. Her favourite hobby was reportedly dancing. As of 2018, Murphy had two living children, Rose and Frederick.

Murphy resided in Harlem, New York for more than 60 years. She became the oldest known living person in the United States, following the death of Lessie Brown on 8 January 2019. In March 2019, she was honoured at Congressman Adriano Espaillat’s Women’s History Month celebration. She celebrated her 114th birthday in July 2019.

Murphy in her early life. 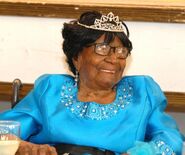