Dr. Alexander Herbert Imich, PhD (4 February 1903 – 8 June 2014) was a Polish-born American supercentenarian, chemist, parapsychologist, and writer, who was the president of the Anomalous Phenomena Research Center in New York City.

Imich was born in present-day Czestochowa, Poland, which was then part of the Russian Empire, on 4 February 1903. In 1951, he and his wife, Wela (1914–1986), emigrated to the United States from the Soviet Union and Imich had lived in Manhattan alone since she died in 1986.

Imich stated that, at the age of 15, he and the rest of his class joined the Polish forces to fight the Bolsheviks in 1918.[1] His older brother served as instructor in the automobile division, so Imich learned to drive trucks for the army until the Bolshevik forces were pushed back and Imich returned to school.[2]

He earned a Ph.D in zoology at the Jagiellonian University in Krakow in 1929,[2] but as he could not find an academic position in zoology, he switched to chemistry. During the 1920s and 1930s he did some research on a medium, Matylda, for the Polish Society for Psychical Research. He published a report in 1932 in a German journal, Zeitschrift für Parapsychologie, but all of the unpublished notes and photos from the research were lost during World War II.[3]

During World War II, Imich and his wife Wela (pronounced Vela) fled to Soviet-occupied Białystok, where he was employed as a chemist.[4] The couple were later interned in a labor camp for the duration of the war due to their refusal to accept Soviet citizenship. They were eventually freed and chose to emigrate to the U.S. in 1951, as almost all of their Polish relatives and friends had died in The Holocaust.[5]

Life in the United States

In 1952, Imich and his wife Wela (died 1986) emigrated to the United States, first to Pennsylvania and then to New York, dividing their time between both places. To make a living, Imich initially took up chemistry, but once Wela made a career for herself as a psychologist in 1965, he turned to parapsychology.[6] After becoming a widower in 1986, he continued his lifelong interest in parapsychology, giving out the Imich prize for parapsychology research for several years until he began experiencing financial problems.[4]

Imich wrote numerous papers for journals in the field and edited a book, Incredible Tales of the Paranormal which was published by Bramble Books in 1995. He formed the Anomalous Phenomena Research Center in 1999, trying to find a way to produce "The Crucial Demonstration", the goal of which is to demonstrate the reality of paranormal phenomena to mainstream scientists and the general public.[7] In 2012, he began to transfer the records of his research into the paranormal to the University of Manitoba Department of Archives and Special Collections.[6] He practiced calorie restriction and attributed his longevity to this.[5] 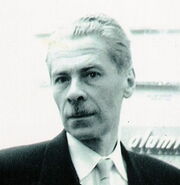 As a younger man

Aged 111, with his Guinness World Records certificate naming him the World's Oldest Man on 8 May 2014