Alexandrina van Donkelaar-Vink (31 January 1895 – 19 May 2006) was a Dutch supercentenarian, who was the oldest person in the Netherlands after the death of Hendrikje van Andel-Schipper.

Alexandrina van Donkelaar-Vink was born as Alexandrina Vink in the small village of Vlaardinger-Ambacht in the province of South Holland, Netherlands, on 31 January 1895. She was a costume seamstress. On 21 June 1916, she married Jacobus (Koos) van Donkelaar with whom she would have four children, of whom three she survived. Between 1925 and 1931, the couple lived on the island of Curaçao. Later, the couple moved back to different places in the Netherlands, such as Baarn, Hilversum and Utrecht. Her husband died in 1951, which means she survived her husband for at least half a century. Later on, she moved to retirement home 'Bunninchem' in the village of Bunnik in the province of Utrecht.

On her 110th birthday in 2005, her daughter's descendants arrived from the United States (as her daughter moved there and married an American soldier) and attended her birthday. One of these descendants was one of her great-granddaughters, who apparently also married a soldier, who was a helicopter pilot. At a high age, Alexandrina enjoyed watching news broadcasts daily. On one day however, she followed the latest news reports and heared that her great-grandson, who was married to her great-granddaughter for three months, died in a helicopter crash in Afghanistan.[1]

On the day before her 111th birthday in 2006, it was reported that she was almost blind and totally deaf but besides that, she was never sick and both physically and mentally still very sharp. Towards the last months of her life, Alexandrina preferred to die and waited until it was over, which apparently took very long according to Mrs. van Donkelaar-Vink herself.[2]

In April 2006, Alexandrina van Donkelaar-Vink fell and hit her head on a wall. After that, her health declined and eventually, she peacefully died on 19 May 2006 at 05:30 AM at the age of 111 years, 108 days.[3][4] At the time of her death, she was the third oldest person ever from the Netherlands and the seventh Dutch person who reached the age of 111. Following her death, Grietje Jansen-Anker became the oldest living person in the Netherlands. 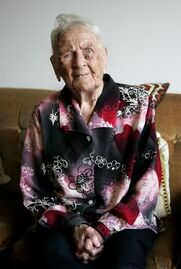