Alfred Smith (29 March 1908 – 4 August 2019) was a Scottish supercentenarian. He is the only Scottish man on record to reach supercentanarian status and holds the record of the oldest Scottish man ever. He was also the joint-oldest living man in the United Kingdom at the time of his death, a title he shared with Bob Weighton of England.

Smith was born on 29 March 1908 in Invergowrie, Perthshire, Scotland. He was the fifth of six sons born to John and Jessie Smith. He attended Invegowrie Primary School and Harris Academy, Dundee before leaving school at the age of 14. He emigrated to Canada with his eldest brother in 1927, but moved back to Scotland after five years to help run the family farm following the death of his father.

Smith married Isobel Harper in 1937, and the couple had two children, Allan (died 2016) and Irene. Smith served in the Home Guard during the Second World War.

Smith retired from farming at the age of 70, but continued to go to the farm until well into his eighties. Following the death of his wife aged 97 in 2003, Smith lived alone in St. Madoes, Perth and Kinross, Scotland. In 2015, when he was 107, Smith met with 105 year-old Jessie Sinclair (who would later become a supercentenarian herself) and 103 year-old Wilhelmina "Neen" Reid, who all shared a mutual friend.

Following a fall in August 2016, Smith moved to nearby Perth to live with his daughter, Irene. Every year for the last few years of his life, Smith exchanged birthday cards with Bob Weighton, who was born on the same day as him. Smith died on 4 August 2019 at the age of 111 years, 128 days.

Smith celebrated his 110th birthday in March 2018, making him the first recorded Scottish man to become a supercentenarian. At the time of his death in August 2019, Smith was the joint-sixth oldest man ever recorded in the United Kingdom, although he dropped to seventh when Weighton surpassed him the following day. After Smith's death, the oldest livng person in Scotland became Janet Mackay (1910-2021) and the oldest living man in Scotland became Jimmy Sinclair of Fife (1912-2020). 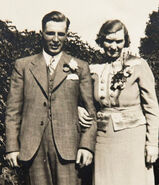 Smith and his wife Isobella on their wedding day in 1937

Smith celebrating his 107th birthday in 2015

Smith celebrating his 108th birthday in 2016 with Councillor Mac Roberts