Alfred "Alf" Nilsson Ihlen [Norwegian: Nilssøn] (30 June 1900 – 6 April 2006) was a Norwegian industrialist and centenarian who was the oldest known living man in Norway at the time of his death.

Ihlen was born in Skedsmo, Ostlandet, Norway (now Lillestrom, Ostlandet, Norway) on 30 June 1900, the son of engineer and politician Nils Claus Ihlen (1855–1925) and Henriette Marie Lund (1870–1962). He was co-manager of the workshop Strommens Vaerksted for about fifty years, along with his brother Joakim Ihlen (1899–1981). The two brothers developed their company into a world leading producer of aluminium based vehicles in the 1930s.

He continued to give interesting lectures and play golf until he was age almost 100.

He became the oldest known living man in Norway, following the death of 106-year-old Karl Doelven on 31 July 2004. 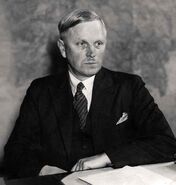 Ihlen as a young man