Alice Thompson (née Rice; born 17 March 1911) is an American supercentenarian whose age is currently unvalidated by Gerontology Research Group (GRG). She currently is the oldest known living person in Illinois.

Alice Thompson was born in Flora, Mississippi, USA on 17 March 1911 to Milton and Georgia Rice.

In 1953, after the death of her husband, John Lee Thompson she decided to migrate from Jackson, Mississippi to West Garfield, Chicago, where she remained until about 2000.

As a Chicagoan, she became a devoted Bulls fan. Her son, M.C. Thompson, deceased before 2020, was a standout basketball player at DePaul University. She later went to Oak Park and lived there for about 10 years, and after, she moved to Berkeley.

She is the mother of 10 children, of which only 4 were still alive in March 2021. When asked about the secret of longevity she said "singing and praying". Becoming a centenarian wasn't something she dreamed of.

At age 109 other than arthritis she was in good health and had a very good memory. Her eldest daughter, Rosie Jenkins, was 89 years old in March 2020.

Thompson currently lives with her youngest daughter, Dorothea Hayes Graham (aged 77 in March 2021) at Berkeley Village, Illinois at the age of 110 years, 313 days. 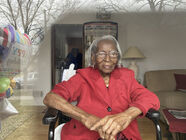