Alida Victoria Grubba Rudge (10 July 1903 – 23 December 2016) was a Brazilian supercentenarian whose age is validated by the Gerontology Research Group (GRG). At the time of her death, she was the oldest known living person in Brazil.

Alida Victoria Grubba was born in Jaragua do Sul, Santa Cararina, Brazil on 10 July 1903. Her father was Bernard Grubba, who was from German origin, and her mother was Maria (née Moser) Grubba. In 1905, Bernard built a mansion where Alida resided at the time of her death. She was the second-oldest out of 7 children in total. She married Manoel Rudge, and the couple had a son named Adhemar (25 October 1926 – c.29 September 2018). He was a retired colonel in the Brazilian army and resided in Sao Paolo. Alida became a widow in 1953.

In 2012, due to old age, she became unable to walk. On her 111th birthday in 2014, it was mentioned that she took daily medication against cholesterol, anaemia, diabetes, and high blood pressure. 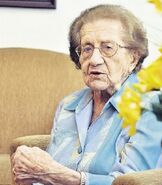 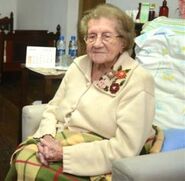