Alma Kahl (née Fraser; born 6 July 1911) is an American supercentenarian whose age is currently unvalidated by the Gerontology Research Group (GRG). She currently is the oldest known living person in Ohio.

In 1950, Kahl met her husband, Cyrus. They married in January 1952 and then moved to Portsmouth, Ohio. Over the years, the couple traveled around the world together. Once, during what would become an infamous trip to Europe, Kahl was invited to have tea with Queen Elizabeth II and she still remembers this tea. Her husband died in 1971.

In addition to traveling, Kahl loved to entertain her family and friends and would often host large dinner parties for her family and friends at her home. Around 1968, Kahl became involved with the local arts and was an instrumental organizer of a major cultural event that honored artists from Portsmouth who made a name of themselves in the art world.

In 1996, when the Vern Riffe Center for the Performing Arts was under construction, Kahl advised that the seating be increased based on past audience numbers. Subsequently, Kahl made a generous donation which helped to fund the “Kahl Black Box Theatre.” Kahl later received a letter from the Ohio Senate thanking her for her outstanding service and contributions to the Portsmouth Area Arts Council Board. Kahl was a member of the Second Presbyterian Church and was honored in 2016 as the woman of the year.

Alma Kahl has served with the Portsmouth Area Arts Council, the Southern Ohio Performing Arts Association, the Sister Cities organization, and the Scioto Christian Ministries board. Kahl has experienced many events throughout her life, such as the 1937 Portsmouth flood, climbing the Great Wall of China, traveling to Hong Kong, Europe and Antarctica, receiving personal letters from President Bush and of course, having tea with the Queen of England.

This display shows Alma Kahl through the years along with her Miss West Virginia University beauty queen photos and her wedding photo. 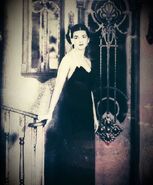 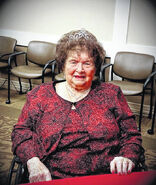 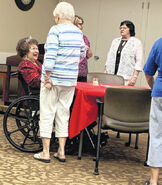 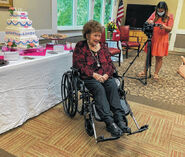