Alphaeus Philemon Cole (12 July 1876 – 25 November 1988) was an American artist, engraver and etcher as well as a validated American supercentenarian who was the oldest living person in the United States. Among supercentenarians validated before October 2020, at the time of his death he was the 25th-oldest person ever and 2nd-oldest man ever, behind Mathew Beard.

Cole was born in Jersey City, New Jersey, USA on 12 July 1876. He was the son of noted engraver Timothy Cole. Cole studied art first under Isaac Craig, in Italy, then in Paris from 1892 to 1901 with Jean Paul Laurens and Jean-Joseph Benjamin-Constant at the Académie Julian, and later at the École des Beaux-Arts. In the mid-1890s, he began to produce many vibrant works, mostly various still lifes and portraits. His painting of Dante was exhibited in the 1900 Paris Salon, and more artwork was displayed at the 1901 Pan-American Exposition in Buffalo, New York.

Cole moved to England and married sculptress Margaret Ward Walmsley in 1903. He began to venture into the fields of wood/steel engraving and etching, but these works sold substantially less than his portraits. He contributed several drawings to the Encyclopædia Britannica. They moved again, to the United States, in 1911. In 1918, Cole became a member of the Salmagundi Club, the nation's oldest professional art club. From 1924 to 1931, he taught portrait and still life classes at Cooper Union. He was elected to the National Academy of Design in 1930. He was the president of the New York Water Color Club from 1931 to 1941. In the 1940s, Cole worked as a judge of paintings in Max Pochapin's Manhattan Hall of Art, a merchandising art gallery, which was a revolutionary idea at the time. From 1952 to 1953, he was president of Allied Artists of America. His first wife died in 1961, and Cole married Anita Rio, a singer, and the widow of painter Eugene Higgins, in 1962. She died in 1973.

Cole actively painted and exhibited up to the age of 103. He died at New York's Chelsea Hotel, where he had lived for 35 years. Cole's work is in the permanent collections of London's National Portrait Gallery and the Brooklyn Museum, and his papers are stored at the Smithsonian Institution.

Cole died in New York City, New York, USA, on 25 November 1988 at the age of 112 years, 136 days. At the time, Cole was also the oldest living man, and was believed to be the oldest verified man ever and the first to reach 112, however the case of Mathew Beard (1870–1985) has now been validated meaning that Cole never had that title. He's the oldest man ever known for reasons other than longevity. 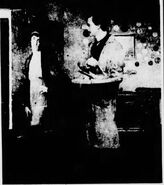 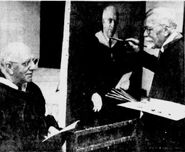 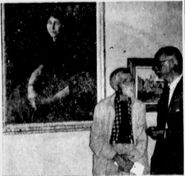 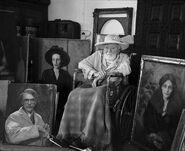