Rivera de Muriel was born in Santa Rita de Sinitave, Antioquia Department, Colombia on 5 September 1910. Her parents were Jose Rivera Castaneda and Rosario Orrego. She married Marco Tulio Muriel Ramirez at age 19 and had 8 children with him: Gerardo, Cecilia, Luzmila, Hernán, Ramiro, Marco Tulio, Eva and Adelfa. Later in her life, she moved to the city of Medellin, more particularly to the neighborhood Comuna 2. At 103, an article was made about her for being the oldest person in her neighborhood. In September 2020, she celebrated her 110th birthday. She had an extremely good memory until her last days, being able to remember with even the smallest details her childhood and youth.

Rivera de Muriel died in Medellin, Antioquia Department, Colombia on 11 February 2021 at the age of 110 years, 159 days. At the time, she lived with her oldest daughter, Adelfa, who was 91 years old. 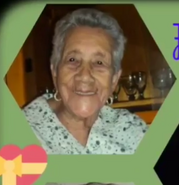 Ana Joaquina at age 104 with her daughters

Ana Joaquina at her 110th birthday