Rojas was born in Jerico, Antioquia, Colombia on 1 April 1910 (although she claimed to have been born on 1 May). She was daughter of Fidelino Rojas and Mercedes Morales Bedoya. When she was a toodler, she moved with her family to Apía, Risaralda. Her siblings were Francisco, José, Gabriel, Miguel and Sofia. She worked as a telegraphist. Her brother, Gabriel Rojas Morales, was the principal of the school Santo Tomas de Aquino of Apía in 1954, where he gained recognization for being one of the best principals of the school. She married to Adalberto Duque. The couple never had children. However, she helped her siblings to raise their children. Both her husband and father were murder during ''La Violencia'' in the 50's. At age 103, she left Apia and moved to the city of Pereira. She celebrated her 110th birthday in April 2020. On her last birthday, she was still able to walk while assisted and she was still mentally sharp as well.

Rojas died in Pereira, Risaralda, Colombia on 23 August 2020 at the age of 110 years, 144 days. According to her family, she had a ''prodigious memory'' till her last day. She was the oldest person in Risaralda department and the whole Viejo Caldas region at the time of her death. 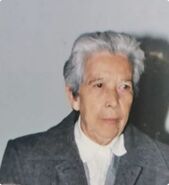 Aged 103, the last year she lived in Apia, while she was interviewing