Ana Maria Vela-Rubio (29 October 1901 – 15 December 2017) was a Spanish supercentenarian who holds the record for the oldest ever person from Spain whose age is validated by the Gerontology Research Group. At the time of her death, she was the oldest living person in Europe, and was also the third-oldest person in the world, after Nabi Tajima and Chiyo Miyako of Japan.

Vela-Rubio was born in Puente Genil, Cordoba, Spain on 29 October 1901. She was orphaned as a child. As a young woman, she worked in a food store in Malaga, Spain. In 1950, she moved to Barcelona with her partner. She never married her partner because her parents didn't approve of their relationship. They had four children: Carmelita (who died aged 10), Antonio, Ana, and Juan.

On 6 June 2016, Vela-Rubio became the oldest validated person in the history of Spain, surpassing the previous record of 114 years, 221 days set by Maria Antonia Castro.

On 29 October 2017, Vela-Rubio celebrated her 116th birthday, becoming one of only eight people in the history of Europe to have reached this age. 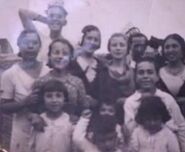