Anders Sigfrid Engberg (1 July 1892 – 6 November 2003) was a validated Swedish supercentenarian who was the oldest living person both in Sweden, and all of the Nordic region.

Anders Sigfrid Engberg was born in Morup, Falkenberg, as the son of Johan Severin and Josefina Engberg, where his father worked as a boatman. He was the seventh born of eight children, and his siblings were named Anna, Jenny, Emma, Gustav, Alvina and Selma. During the First World War, Engberg was in the military with the assignment to guard the coast.

He worked in agriculture for most of his life. In 1924, he married Gerda Nilsson, a woman from Lindhult of whom he had met while working as a farmhand. The couple had 4 children in total, and were married for 42 years until Gerda's unexpected death in 1966, when she suddenly died one Sunday as they cycled home from church. He was predeceased by two sons, Gösta and Gert, who both died of cancer. By the time he was 111, he had also lost grandchildren and great-grandchildren. He had been a smoker until quitting when he was aged 60, and lived on his own in Skogstorp until he was 104, from which he moved into a care home.

On 23 February 2002, he overtook the final age of Nikolaus Henriksson to become the oldest man ever from Sweden.

Following the death of Johanne Svensson on 29 May 2003, he became the oldest living person in Sweden, and all of the Nordic region.

Engberg died on 6 November 2003, at the final age of 111 years, 128 days. At the time of his death, he was the oldest living Swedish man. As of 2022, he is the first of two male supercentenarians to reside in Sweden, the other being currently-unverified Carl Mattsson.[1]

On 14 July 2019, his male longevity record of Sweden was broken by Carl Mattsson of Stromstad. The record stood for over 17 years. He still holds the record as the oldest validated Swedish man ever, as well as the oldest person ever from Halland county.

Engberg as a teenager with his family, 1911 (in the middle, the tallest of the two boys).

Engberg shortly before his 110th birthday in 2002, with two retirement home caretakers. 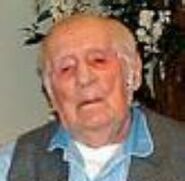