Andre Boite [French: André] (born 6 December 1910) is a French supercentenarian whose age is currently unvalidated by the Gerontology Research Group (GRG). He is currently the oldest known living man in Europe.

Andre Boite was born in Argent-sur-Sauldre, Cher, Centre-Val de Loire, France on 6 December 1910. During World War II, he enlisted in the Free Corps and was a prisoner of war deported to Bavaria.

He married Yvette on his 41th birthday in 1951, in Bougarez (Algeria, then French Algeria). The couple had three children, one daughter and two sons, one of whom now deceased. Yvette died of Alzheimer's disease in 2017 at the age of 95.

He studied fine arts, and participated in the restoration of paintings in Sissi Castle, Schonbrunn, Vienna and Notre-Dame de Paris. From 1966, he invested in tourism and taking part in a tourism advisory committee in London and Berlin. He drove until the age of 99.

At the age of 108, Boite could reportedly still walk in his flat with the help of a walker. In December 2020, he celebrated his 110th birthday.

For the occasion of his 111th birthday in 2021, Boite was visited by the mayor of Nice, Christian Estrosi.

He became the oldest known living European-born man, following the death of Italian-born Delio Venturotti of Brazil on 1 June 2022. 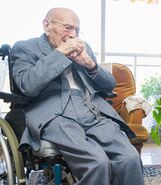