Andree married Pierre Guyon (1911–1971) on 5 June 1937 in Paris. She had two daughters (Jacqueline and Christiane), who later gave her six grandchildren, eight great-grandchildren, and two great-great-granchildren. She moved to Saint-Eliph in 1941.

The same year, Guyon was hired as a cooker in Champrond-en-Gatine, Eure-et-Loir. She worked 70 years for the Bonnichon family.

Guyon kept on working until age 99. She celebrated her 100th birthday with 80 family members, including 3 surviving (half-)sisters: Jeanne, Paulette and Jacqueline.

On 2015 winter, Guyon was amputated of a leg, during an eight months-long stay in the hospital. Thus, she needed a wheelchair to move, but she stayed optimistic when interwieved on her 105th birthday: "Oh yes, I'm 105, I have this luck! I keep on navigate in the house with my wheelchair. And when there's sun, I seek it !" She made installing an access ramp to be able to go in her garden and enjoy her flowers. She was visited by Christophe Barral, the mayor of Saint-Eliph.

Since October 2017, Guyon participed to the run "Les Demoiselles du Bugatti" in Le Mans with her family: it's a run who sensibilisates to breast cancer.

As of her 108th birthday, Guyon was still watching the news, and her meals are delivered. She said: "What I think about the world's march ? It's not very beautiful ! Workers hadn't work anymore and can't do what they want... Myself, I've worked several years to earn a small wage, so I've a little pension and I mustn't do any madness." 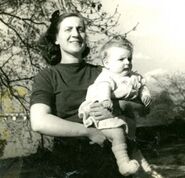 Andree Guyon as a young woman.