Angela Hutor (born 12 August 1913) is a French-born British centenarian who is one of the oldest known survivors of COVID-19, having recovered from the disease at the age of 106.

Hutor was born on 12 August 1913 to Italian parents, and she grew up in Cannes, France. She remembers seeing wounded First World War soldiers being carried by stretchers onto beaches near her home as a child. She also remembers the 1918-19 Spanish Flu pandemic. Hutor's father worked at the Hyde Park hotel in London, England, and he brought her to London to study at a convent boarding school.

As an Italian national without a British passport, Hutor was not allowed to help with the national effort during the Second World War and had to report to the police if she changed address. After the war, she met her husband, Paul, and they married when she was 36. The couple had one child, Pauline, born in 1952 or 1953. Hutor had a variety of jobs throughout her life; she worked as a shorthand typist, receptionist, governess, and nightclub florist.

After her husband's death in the 1990s, Hutor lived independently until she was well into her 90s. In 2019, she moved to a care home run by a group of nuns in Stoke Newington, London, England.

In April 2020, Hutor contracted COVID-19 during the coronavirus pandemic. At her worst, she was on and off an oxygen tank, eating nothing and barely drinking. Her daughter was called in to say her final goodbyes, but soon after she started rallying round. On the 75th anniversary of VE Day in May, she was well enough to sit up with a glass of wine and wave a little flag, and after a few weeks she had completely recovered.

Hutor celebrated her 107th birthday in August 2020. At the time, it she was believed to be the UK's oldest living survivor of COVID-19, being just a few weeks older than fellow British survivor Connie Titchen. However, it has since been reported that Joyce Wooding of Northampton, England, recovered from the disease in April 2020 at the age of 108.

Hutor at the age of four

Hutor as a young woman 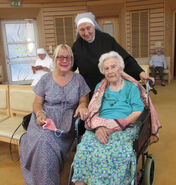