Angela Tiraboschi (19 April 1910 – 7 May 2022) was an Italian supercentenarian whose age is currently unvalidated by the Gerontology Research Group (GRG). At the time of her death, she was the oldest known living person in Italy. However, she was the second or third-oldest known living Italian-born person, behind Delio Venturotti of Brazil, and Catherine Abate of the United States (Abate died on the same day as her, but the precise times of death for Abate and Tiraboschi are currently unclear).

Angela Tiraboschi was born in Oltre il Colle, Bergamo, Lombardy, Italy on 19 April 1910. She married Agostino Brozzoni in 1938. The couple had four children: Maria, Pietro, Luciana, and Roberto. The couple also had one daughter who died at 16 months. She got widowed in 1990.

Tiraboschi died in Azzano San Paolo, Bergamo, Lombardy, Italy on 7 May 2022 at the age of 112 years, 18 days. Coincidentally, her death occurred on the same day as the death of Catherine Abate, the oldest known living Italian-born woman. 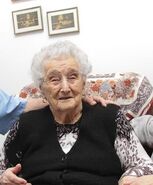