Angelino Rivera (10 April 1907? – 3 April 2018) was a Puerto Rican supercentenarian whose age is currently unvalidated by the Gerontology Research Group (GRG).

Angelino Rivera claimed to have been born in Puerto Rico on 10 April 1907. At age 76, he married Gregoria Sambolin. 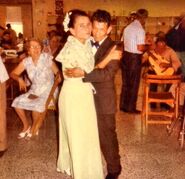 Angelino with his wife Gregoria on wedding day.

Angelino with his niece Lucy Rivera and his grandniece Yahaira.