Antalne Banga (née Anna Rekasi) [Hungarian: Banga Antalné Rékasi Anna] (9 August 1887 – 1 July 1995) was a Hungarian centenarian. At the time of her death, she was the oldest living person in the country.

Anna was born on 9 August 1887, in Kistelek, Austria-Hungary (present-day Hungary).

As a child, Anna was an exemplary student. She married to Antal Banga at the age of 18, they had seven children in total. They lived in the village of Szank since 1907. Anna was a housewife in all her life. She got widowed in 1950.

As a centenarian, Anna lived with one of her daughter-in-laws. She was elected to be the honorary citizen of Szank at the age of 106. She became the oldest living person in Hungary upon Janosne Ando’s death in September 1994, aged 107. At that time, she had 18 grandchildren, 18 great-grandchildren and seven great-great-grandchildren. 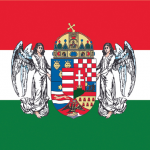