Anton Geisler (Arne Samuel Karl Anton Geisler) was born and raised in the now abandoned settlement of Aamaruutissat (Skansen), near Qeqertarsuaq, Qeqertalik, Greenland. At the age of 18, Geisler started working in a shop in Maamorilik, Qaasuitsup. After that, he worked as a cook aboard the ship "Tulla", and later as a waiter in the village of Ivittuut. Geisler moved to Denmark where he was educated to became a baker. In 1952, he returned to Ilulissat after education in Denmark. He got a job at the town's bakery and was there until the beginning of 1970s, when he started a coffee bar. Later, the coffee bar became his residence.

On the National Day of 2011, Geisler was awarded with the Qaasuitsup Kommunias Cultural Award for his long-standing work. Geisler became the oldest living person in Greenland following the death of a 98-year-old woman in April 2015. In 2018, he said: "I want to work as long as I can, I fear that I will get stuck if I stop working. But I know that at some point I will need to stop working".

In February 2019, Geisler celebrated his 100th birthday and became the first (known) male centenarian from Greenland. Geisler worked in his shop every single day from 2/3 PM to 9 PM until he retired in June 2020 at the age of 101.

Anthon Geisler died at the Unganartoq nursing home in Ilulissat, Avannaata, Greenland on 28 February 2021, at the age of 102 years, 7 days. 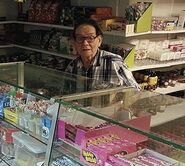 Anton Geisler at the age of 94.

Anton Geisler at the age of 98. 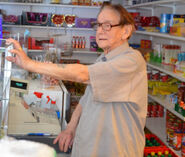 Anton Geisler at the age of 99. 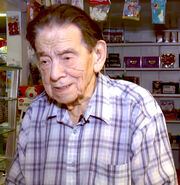 Anton Geisler at the age of 102, just days before he died.