Antonia Gerena Rivera (married name Solis; 19 May 1900 – 2 June 2015) was a verified Puerto Rican-American supercentenarian. She lived to the age of 115 years, 14 days and became the sixth-oldest living person in the world and the third-oldest in the United States. She was also the oldest living Floridan and is the second-oldest person ever to have been born in Puerto Rico and the oldest woman born there.

Gerena was born to Jose Felix Gerena and Basilia Rivera in the town of Loiza, Puerto Rico and raised in Barrio Cubuy, Río Grande. She had 9 children. She was of Canarian ancestry. Antonia Gerena Rivera comes from a long lived family. Her brother Frank lived to the age of 105 and her sister, Maria, lived to 103. She had eight children, two of them survived her (Carmen and Fe) and has 27 surviving grandchildren. Her family said that the genes of their family and drinks brandy were the reasons of her longevity. Her family describe her as a "strong and worker woman".

She holds the record for being the oldest Puerto Rican-born woman ever, and second-oldest person behind Emiliano Mercado del Toro (1891–2007, who holds the overall island record at 115 years, 156 days), and also holds the record for being Florida's oldest resident ever, surpassing Mathew Beard’s age of 114 years, 222 days, set in 1985 (Carrie White's claim to 116 in 1991 was later retracted when a subsequent investigation cast doubt upon her age).

Antonia has met Stan Primmer, director of the Supercentenarian Research Foundation, as well as Dr L. Stephen Coles, Co-Founder of Gerontology Research Group and her family has contributed to genetic supercentenarian study groups. She was also visited twice (in 2011 and 2015) by Robert Young, Director of GRG Supercentenarians Department and Guinness World Records' Senior Consultant for Gerontology. She was also mentioned in Guinness World Records 2015 as the seventh-oldest living person worldwide (in fact, she was in eighth place because an anonymous Japanese woman, born 15 March 1900, has been certified only afterwards).

She died in Miami, Florida, USA on 2 June 2015 at the age of 115 years, 14 days as the world's sixth-oldest person retroactively and the third-oldest in the United States.

Gerena Rivera at right, aged 27, with her daughter Carmen, aged 2, at left.

Gerena Rivera at the age of 114 with Robert Young. 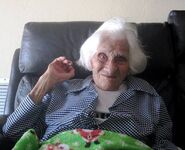