Antonia Valderrama Ocampo (11 April 1907 – 9 June 2020) was a Mexican supercentenarian, whose age was validated by the Gerontology Research Group (GRG) on 26 July 2019. She originally claimed to have been born in 1905, but the validation process concluded that her actual birthdate is 11 April 1907.

Antonia Valderrama Ocampo was born in Hacienda de Cabanas, Guerrero, Mexico, on 11 April 1907 (claimed 1905). She had at least two brothers. She witnessed the passage of hurricane Tara in 1961, which left several communities in the region destroyed, including her birthplace, Hacienda de Cabanas. She remembered that when she was a girl, she saw the men and women who participated in the Mexican Revolution. She married in Hacienda de Cabanas but had no children. She allegedly met Lucio Cabanas Barrientos, Mexican schoolteacher, when he was traveling through the region: "I met him when he came several times to Hacienda (Cabanas), we even gave him food...", she said.

On 15 October 2019, she surpassed the age of Ambrosia Acosta Teran (1904–2016), becoming the oldest validated person who ever lived in Mexico. She was cared by two of her nieces. 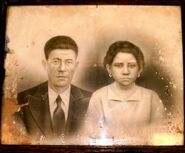 Valderrama Ocampo with her husband in 1930's.