Antonino Turturici was born in Caltabellotta, Sicily, Italy on 18 January 1912. He had six sisters: all had long-lived, one of which Domenica lived to be 101.

He was married with Angela Schittone for 58 years. The couple had one daughter: Maria Biagia. He worked as farmer until age 92 and drove the car until the age of 94.

As of December 2020, he had one living daughter Maria Biagia, two grandchildren and many great-grandchildren.

He became the oldest known living man in Italy since the death of Giovanni La Penna on 28 December 2020.

In April 2021, aged 109, Turturici received his first dose of the Moderna COVID-19 Vaccine, making him one of the oldest (known) people to receive the vaccine. 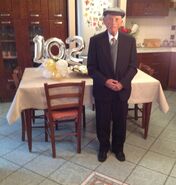 Turturici at the age of 106

Turturici at the age of 107

Turturici at the age of 109