Antonio Luigi Baldo (6 July 1887 – 28 August 1998) was a validated Italian supercentenarian. At the time of his death, he was the oldest living person in Italy as well Italy's oldest man ever. His age record was broken by Antonio Todde in 2000.

Antonio Luigi Baldo was born in Veneto region, Italy, on 6 July 1887. He participated in the First World War. He was married for 62 years until his wife's death in 1981. He had three children, and outlived at least two of them.

At the age of 107, Baldo was living with his daughter in the village of Nogara. His health was still incredibly good at that time, after having recovered from a fall a year earlier. He would ride his bicycle on a regular basis, walk a lot, and work on his land where he mainly harvested tobacco - albeit he himself did not smoke or drink. At the age of 108, he wrote a letter to the then-President of Italy, because he still had not recieved any pension, even though he retired in 1952. At that time, his main hobby was riding his tractor. 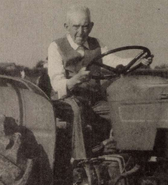 Baldo on his tractor aged 108.