Apolonia Malate was born on 4 March 1899 in Dingras, Ilocos Norte, Philippines, just after the Treaty of Paris, which gained the United States the control of the Philippines.

On 3 May 1933, Apolonia married Carmelo Malate, and would go on to have 2 sons, Vincent and Quirino, and a daughter with him. At some point in her life, she immigrated to Ewa Beach, Hawaii, where she would live the rest of her life with her son Quirino.

She celebrated her 105th birthday in March 2004 in a John Dominis Restaurant with her 2 sons, daughter-in-law, grandson, and granddaughter. 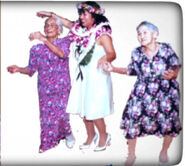