Augusto Moreira de Oliveira (6 October 1896 – 13 February 2009) was a Portuguese supercentenarian who, was at the age of 112 years, 130 days, the oldest man to ever live in Portugal and was also for over a month, the oldest living person in Portugal after the death of Maria de Jesus on 3 January 2009. He became the oldest living man in Portugal on 5 May 2003 after the death of 107-year old World War I veteran Jose Luis Ladeira. His successor in both the titles was Antonio de Castro. At the time of his death, he was the world's fourth-oldest living man, behind Tomoji Tanabe, Henry Allingham, and Walter Breuning and the second-oldest in Europe, behind Henry Allingham. He's currently the 33rd oldest man ever.

As of his 111th birthday in 2007, Moreira de Oliveira was reported to be lucid but required help in communicating with his family. He was able to bathe himself and was able to walk around. He was able to walk for 5 kilometres at the age of 100 and was working on his land until the age of 108. He took medications for blood circulation. He drank a glass of wine daily and was a fan of the Porto FC and was even gifted a bottle of wine from the chairman of Porto FC, Jorge Nuno Pinto da Costa. He had hearing problems but enjoyed independence and woke up at about 8-9 AM.

He died on 13 February 2009 at the age of 112 years, 130 days due to respiratory problems associated with influenza. He died in Grijo, Vila Nova de Gaia after having lived there for 15 years. 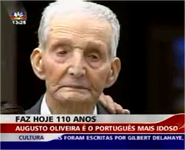