Barbara Barton (née Gibbs; born 12 October 1908) is an American supercentenarian who is the oldest known person living in the U.S. state of Rhode Island. Her age is currently unvalidated by the Gerontology Research Group.

Barbara Barton was born on 12 October 1908 in Barrington, Rhode Island, USA, the only child of Harold and Mabel (Collamore) Gibbs. She studied textile design at the Rhode Island School of Design, graduating in 1928. She went on to work as a fabric designer in Worcester, Massachusetts. She married Edwin Barton (1909–1992) on 24 October 1931, with whom she had four children: Prudence, Charlotte, Ralph and Edwin.

Barton currently lives in a care home in East Providence, Rhode Island. She celebrated her 112th birthday in October 2020.

Barton at the age of six

Barton in an undated photo 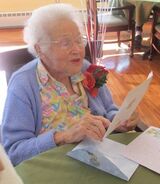 Barton celebrating her 106th birthday in 2014 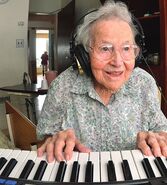 Barton playing her keyboard at the age of 106

Barton celebrating her 107th birthday in 2015