Benvinda Marques Matias (15 February 1906 – 23 September 2017) was a Portuguese supercentenarian whose age is currently unvalidated by the Gerontology Research Group (GRG).

Benvinda Marques Matias was born in the village of Monte Frio, Coimbra, Portugal on 15 February 1906 to Maria dos Anjos and Alvaro Marques. She had 10 brothers. Both of her parents died in 1954. She worked in the field. In October 1930, she married Luis Goncalves Matias in Folques. They moved to Lisbon in search for a better life.

Benvinda worked in the market. She become a widow aged 35 years with small child to raise. She spent 8 years in Maputo (then Lourenco Marques), Mozambique, with her son. In 2005, she come to Alfeizerao and lived in nursing home with her son. Her only son died around 2011. 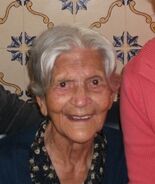