Bernadette Caye was born as Bernadette Berthaud in La Baule, Loire-Atlantique, Pays de la Loire, France on 28 February 1911. She had eight siblings. She grew in La Baule, before moving near Paris at age 20, as she just married. They had one child, Bernard (deceased as of 2020).

Caye made a lot of professions, like baker, nurse, and seller. In her life, she took care of a lot of people. She also assisted her husband in her company; she has already driven trucks.

Caye's husband died when she was 59. She lived alone in her own flat in Paris (where there weren't any elevators) until age 102, when she came back to Loire-Atlantique department as her sight was worsening. She moved in the Résidence des Lauriers in Le Croisic in 2016. She likes whisky, chocolate, and crustaceans. Her favourite meal is chicken with chips.

In March 2021, Caye celebrated her 110th birthday with her relatives (like her great-niece Jacqueline Berthaud and her great-nephew Patrick Berthaud). She was also visited by Michele Quellard [French: Michèle Quellard], the mayor of Le Croisic. 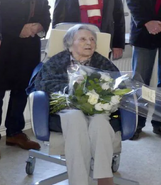