Beulah Mae Young (née Miller; 18 August 1900 – 19 September 2011) was an American supercentenarian whose age has been validated by the Gerontology Research Group (GRG).

Young was born as Beulah Mae Miller in Bethlehem, Pennsylvania, United States, on 18 August 1900 to Carrie Miller and her husband. In 1907, she sat on the lap of the famous Buffalo Bill during one of his shows. She witnessed lots of violence and rioting during the Great Steel Strike of 1909. While on a train ride to Chicago in 1920, Young met the daughter of then-President Woodrow Wilson.

Throughout World War I, Young worked at Redington Fuse Company, where she helped to make ammunition for soldiers fighting in England and France. It was there that she met her future husband, George W. Young, who she married in 1917. They had six children, all of which were born in their house. Young found work during World War II at Taylor-Wharton making oxygen cylinders for medics on the front lines. George Young died in 1954 at the age of 55.

In 2000, Young moved to Gracedale Nursing Home in Nazareth, Pennsylvania. She had lived in 32 different homes in her life, and Gracedale was the final one. Young’s descendants included six children, 18 grandchildren, 31 great-grandchildren and 10 great-great-grandchildren. On her 111th birthday in 2011, when asked her secret to a long life, she quipped, "Stay away from the doctors. They'll kill ya!"

Young died on 19 September 2011 at the age of 111 years, 32 days. Her last words were reported to be, “I do not have pain.” Several of her children lived into their eighties and nineties, and her eldest daughter, Marjorie, died in 2019 aged 100.

Young in 1920 with her husband and two eldest children, Marjorie and Charles 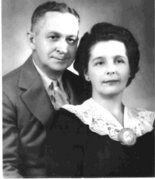 George and Beulah Young in 1935

Young in her later years

Young (right) in 2010 with her daughter Marjorie and son George