Aguilar Aizprua was born in Santa Fe, Veraguas, Panama, on 22 April 1909. Her parents were Arcesio Aguilar and Placida Aizprua. She had nine children (five alive as of January 2016).

Aguilar Aizprua died in Chilibre, Panama District, Panama Province, Panama on 24 March 2020 at the age of 110 years, 337 days. At that time of her death, she was the second-oldest known living person in Panama, behind Elvira Paredes. 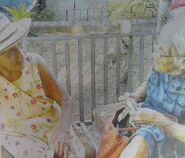