Robert Grant Pitts "Bob" Weighton (29 March 1908 – 28 May 2020) was a British supercentenarian who was recognised as the oldest living man in the world by Guinness World Records at the time of his death. His age is also validated by the Gerontology Research Group.

Weighton was born in Kingston-upon-Hull, Yorkshire, England, UK on 29 March 1908. He was one of seven children. He said that his earliest memory was contracting mumps at the age of five. He also recalled watching fires caused by Zeppelin raids from his bedroom window during the First World War.

Weighton's father paid an extra £3 a term so he could stay at school until he was 16, which enabled him to take up a marine engineering apprenticeship. After qualifying, Weighton struggled to find a job, so decided to work abroad as a teacher. He moved to Taiwan in 1933 to teach at a missionary school, but first had to spend two years in Japan learning the language.

In 1937, Weighton married his wife, Agnes, a teacher he had known since they studied together in England. After marrying in Hong Kong, they returned to Taiwan, where their first child, David, was born. The family decided to return to England in 1939, but were diverted to Toronto, Canada, due to the onset of the Second World War. While in Canada, the couple had two more children: Peter, and Dorothy.

Weighton later moved with his family to the United States, where he worked in a factory that made aeroplanes for Britain to help them fight the war. His knowledge of Japanese meant that he went on to work for the British Political Warfare Mission, and helped to decipher enemy messages during America's battle with Japan.

In 1946, Weighton returned to England with his family, where he met his in-laws for the first time. He took up a teaching position at City University, London, and spent the rest of his working life as a lecturer in marine engineering.

After retiring, Weighton and his wife moved to Alton, Hampshire, England in 1973. Around 1990, he had to undergo an operation to remove a growth on his stomach. Agnes died in 1995, and their son, Peter, died in 2014.

After his wife's death, Weighton moved in to a flat in an Alton care home, where he lived independently. The second bedroom in his flat was a workshop filled with furniture, windmills, and puzzles he made and sold in aid of charity, often from bits of wood pulled from skips. He also sold self-published poetry books and raised almost £900 for Brendoncare, the charity that operated his care home.

As of March 2019, shortly before his 111th birthday, Weighton was still able to do his own shopping. In an interview to mark his 111th birthday, he joked that his secret to longevity is "avoiding dying". In June 2019, he was interviewed by BBC Radio 4, in which he talked about his life. He also accompanied a community fundraising team on visits to local schools to talk in assemblies about his life.

In March 2020, Weighton was forced to cancel his 112th birthday celebration due to the onset of the COVID-19 pandemic. As a result of social distancing rules, he was also unable to receive a personal visit from a Guinness World Records official to be recognised as the world's oldest man. Instead, his care home arranged for him to be presented with a certificate by staff on his balcony. Earlier on the same day, he was interviewed live on breakfast television programme Good Morning Britain.

Weighton died from cancer on 28 May 2020, at the age of 112 years, 60 days. At the time of his death, he had 10 grandchildren, and 25 great-grandchildren. Prior to his funeral on 19 June 2020, the hearse drove slowly through the town of Alton and past the care home where he lived so residents could pay their respects.

Weighton shared his views on politics and current affairs on several occasions during interviews, as well as his opinions on life in general. He was never a member of a political party, but said "if anything, I have supported the Liberal Democrats." From his 109th birthday onward, Weighton refused the traditional birthday card from the Queen, saying "in an age of austerity I thought I would save the country a little bit on postage and printing."

Weighton said he was "a bit irked" by the fact that the UK's withdrawal from the European Union (EU), which formally began on 29 March 2017, coincided with his 109th birthday. He believed the UK's decision to leave the EU was a mistake, saying "You can't just walk away and expect it not to have any repercussions. It's not like resigning from a golf club because you don't like the secretary, it's more like a divorce with all of the heartache and recriminations that follow."

The UK was originally due to leave the EU on 29 March 2019, Weighton's 111th birthday, but was delayed after the British Parliament voted against ratifying it three times. Weighton described the situation as a "total mess" and reiterated his opposition to Brexit, saying "My own feeling is that if there were defects, and there were quite obviously defects, we can negotiate on the inside rather than walking off the field with the cricket ball and saying 'I'm not playing.'"

Weighton supported environmental activism, describing himself as an "eco-warrior." He expressed admiration for Swedish climate activist Greta Thunberg, saying "she’s made a splash, and because of her age she’s made an impact that a person of my age wouldn’t have."

Weighton encouraged others to take action in order to tackle climate change, saying "there are small things that we can all do, like not buying meals in plastic trays." He also believed that the UK is "failing to make use of tidal power."

Weighton described British Prime Minister Boris Johnson, and U.S. President Donald Trump as "a couple of comedians on the world stage." He also branded Russian President Vladimir Putin as a "danger to the world."

Weighton said he was "worried" about the COVID-19 pandemic, which broke out shortly before his 112th birthday, but said that the Spanish Flu pandemic a century beforehand was worse. Weighton said "The number of people dying in China is scary. But in Europe and elsewhere, the numbers are still not reaching the millions that died of the Spanish flu. I hope they never do. But you never know how bad the coronavirus will get. You just have to do the best you can and not worry."

Weighton became the oldest living man in England, following the death of John Mansfield on 27 November 2016. At the same time, he also became the joint-oldest living man in the whole of the United Kingdom, along with Alf Smith of Perth, Scotland. Weighton held this title on his own after Smith’s death on 4 August 2019.

Following the death of 111-year-old Hilda Clulow on 24 December 2019, Weighton became the oldest living person in the United Kingdom, a title he shared jointly with Joan Hocquard of Poole, England. He was the first man to hold this title since James Harrow in 1976.

Weighton was believed to have become the oldest living man in Europe following the death of 114-year-old Gustav Gerneth of Germany on 21 October 2019, although Gerneth's age remains unvalidated as of June 2020.

Following the death of Chitetsu Watanabe on 23 February 2020, Weighton became a candidate for the oldest living man in the world. He was officially recognised as the world's oldest man by Guinness World Records on 30 March 2020, the day after his 112th birthday. He was the first British man to hold this title since Henry Allingham.

Weighton as a young boy. 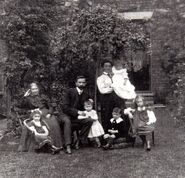 Weighton (bottom, center) and his family. 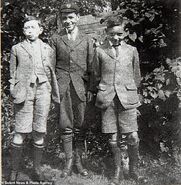 Weighton (standing) as a young man.

Weighton with his wife on their wedding day. 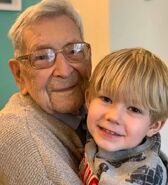 Weighton shortly before his 110th birthday in 2018. 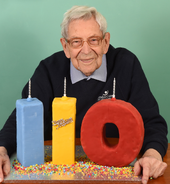 Weighton celebrating his 111th birthday in 2019. 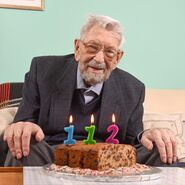 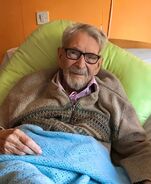