Maria Filkor Boldizsarne Sztrecho [Hungarian: Sztrecho Boldizsárné Filkor Mária] (2 August 1866? – 7 July 1978) was a Hungarian supercentenarian claimant whose age is currently unvalidated by the Gerontology Research Group. If validated, she would be the world's oldest living person from 25 April 1978 (death of Marie-Virginie Duhem) to 7 July 1978 (her own death).[1][2]

Sztrecho died in Pásztó, Hungary on 7 July 1978 at the claimed age of 111 years, 339 days. After her death, Fannie Thomas became the world's oldest living person.

During her lifetime, Sztrecho was officially recognized as the oldest living person in Hungary between 1972 and 1978 by the Central Office of Statistics. However, the baptism record of her daughter from 1897 suggests that she was in fact 10 years younger than her claimed age. 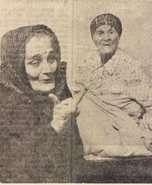 Sztrecho (on the left) at the claimed age of 111