Candelaria Padilla Ladeuth (born 4 October 1911) is a Colombian supercentenarian whose age is currently unvalidated by the Gerontology Research Group (GRG).

Candelaria Padilla was born in San Antero, Cordoba, Colombia on 4 October 1911, although she claims to have been born on 13 July. Her parents were Manuel Padilla and Josefa Ladeut. She had 12 siblings (including one older sister).

At the age of 9, she moved to Cartagena and worked in a house in Bocagrande until she was 15 years, when she went through a severe illness that had her hospitalized and that is why her employers returned her to San Antero.

At the age of 18, she returned to La Heroica and continued working as a domestic worker. She had three children (including Etilsa Mena Padilla). 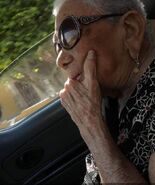 Candelaria Padilla in her centenarian years

Candelaria Padilla around the age of 110