Carlos Julio Rincon Garzon (Spanish: Rincón Garzón; born 24 December 1910?) is a Colombian supercentenarian claimant whose age is currently unvalidated by the Gerontology Research Group (GRG). If his claimed age is documented, he would be the third-oldest known living man in Colombia, after Eusebio Quintero Lopez and Efrain Antonio Rios Garcia.

Carlos Julio Rincon Garzon claims to have been born in Convencion, Norte de Santander, Colombia on 24 December 1910. Faced with adversity at a young age - his mother died when he was just 4, and he never met his father - he learned to be independent and self-sufficient early on. He lived a nomadic lifestyle, playing music for people with his guitar while traveling across Colombia.

He first married at a younger age, having three children, with one dying as a baby. His wife left him shortly there after, leaving him to raise his two boys alone. Many years later, he met Doña Leonor Lozano, who was nearly 30 years his junior. They married in the 1950s, having nine children together. They remained married until her death in 2007.

Rincon Garzon spent much of his career as a farmer, but fell on hard times when his farm was seized by the bank. They relocated to the neighborhood of La Pinuela in Cocorná, Antioquia, Colombia, where he remained for the rest of his life. He was witness to many technological advancements throughout his long life, remembering the first time he saw an airplane, recalling the commotion as people in the village screamed at the loud noise the engine produced, thinking the world was ending. He also remembers the construction of the first train tracks in the Cesar region, and personally felt that the train would be dangerous to pedestrians crossing the tracks. He considers the cellphone to be the greatest invention of his lifetime.

Each of Rincon Garzon's birthdays have been proudly celebrated by his entire large family, with his recent birthdays garnering some attention in the Colombian media. His claimed 110th year was to be met with great fanfare, but the coronavirus pandemic left the party to be celebrated mostly digitally.

On 13 March 2021 at the claimed age of 110, Rincon Garzon received his first dose of a Covid-19 vaccine, making him one of the oldest people to receive the COVID-19 vaccine.

In May 2022 at the claimed age of 110, he voted at the Colombian presidential election.

Undated, with his wife and children. 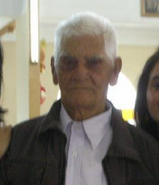 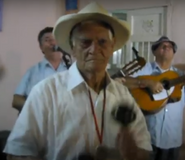 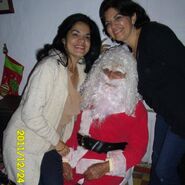 At the claimed age of 101, dressed as Santa Claus. 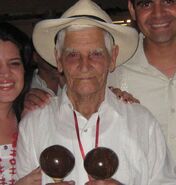 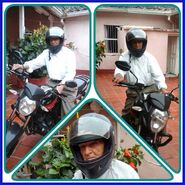 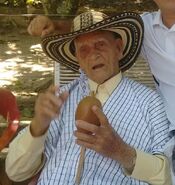 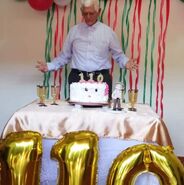 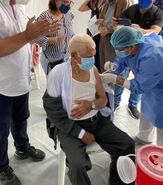