Lawrence was born in Victoria, Australia on 8 December 1902. Lawrence became a Sister of Mercy at the age of 17, and worked as a teacher and carer at schools and orphanages in Goulburn and surrounding areas. She later retired to a convent in Young. 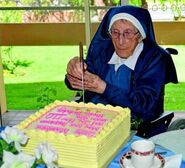 Sister Madeleine at age of 110