Cecile Edith Klein (née Efros; 15 June 1907 – 13 January 2022) was a Canadian supercentenarian whose age is validated by the Gerontology Research Group (GRG). At the time of her death, she was the oldest validated living person in Canada.

Klein was born in Montreal, Quebec, Canada on 15 June 1907 to Polish-born Jewish parents Louis Efros (1881–1950) and Rachel Pearson Efros (1887–1965). In 1923, Klein began attending secretarial school and taught herself typing. Klein began working for a lawyer's office and later for an early form of HR at RCA Victor. During the Great Depression, Klein managed to find her uncles a position at RCA Victor.

Klein later moved to Westmount, Quebec where she married Israeli-born Erwin Klein (1905–1999) on 5 June 1932. The couple had three children: Harriet, Arnold, and Louise. Klein had a grandmother who lived to 103, still alive at the time she married Erwin, alongside Klein's centenarian great-aunt.

Klein's husband, Erwin, had his Pharmacy bought out by Bayer in 1949. Erwin died in 1999 at the age of 94 following 67 years of marriage. Klein lived in their duplex in Westmount until she suffered a fall in 2017 and subsequently moved into an assisted living facility in Côte Saint-Luc.

Klein still traveled into her centenarian years; at the age of 102 and 103 Klein went on two cruises, one to Alaska and one in Mexico.

After suffering a fall which injured a pelvis at the age of 110, Klein became less active and could no longer walk.

At the age of 111, Klein could still read the newspaper without glasses.

Klein reportedly received her first dose of the Covid-19 Vaccine in December 2020, making her the one of the oldest known people to receive the vaccine.

In August 2021, Klein attended a concert in Cote Saint-Luc, Quebec. 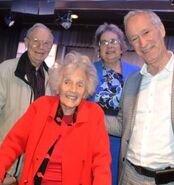