Charlie Nelson was born in Canton, Ohio on 21 September 1867. As a young child, his family moved to a small town in Iowa called Guthrie Center in 1872. Nelson had various jobs, such as being a teacher at local county schools, owning a drug store (after taking a pharmacy course at Northwestern University) and repairing watches. He was also in the real estate business, selling insurances.

When he was in his 80's, he was elected as the mayor of Guthrie Center. He held this position for eight years. He attributed his longevity "to his love of people, for life, and keeping interested in world activities, as well as continuing to work."

He maintained his independence well into his senior years, driving a car until he was aged 99, and continued to live on his own until he was 108, by which point he moved into a retirement home, but still maintained good health, walking with the aid of a cane even as a supercentenarian. He would spend much of his time playing checkers with other residents, and liked walking around the care facility, sometimes visiting the room of his younger sister, who was also a resident; she was aged 100 at the time of Nelson's 110th birthday. She would die just a few weeks after her brother, 14 days shy of her 101st birthday. In addition to his sister, longevity was prevalent in his family, with his father, George Benton Nelson (1843–1935), living to be 92 years and his mother, Margaret Kryder (1842–1934), to 91 years.

Nelson died on 20 August 1978 in Guthrie Center, Iowa, USA at the final age of 110 years, 333 days. He was the 3rd oldest living person in the world at the time of his death, behind Fannie Thomas and Anna Murphy. He was, however, the world's oldest living man and the last verified surviving man born in the 1860's.

Charlie Nelson cleaning a plugged drain at the age of 107. 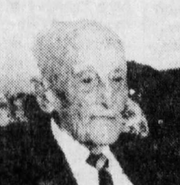