Charlotte Marion Hughes (1 August 1877 – 17 March 1993) was a British supercentenarian who, at the age of 115 years, 228 days, holds the record as the longest-lived person from the United Kingdom ever documented.

Charlotte Marion Hughes was born on 1 August 1877 in Hartlepool, County Durham, England. She grew up in Middlesbrough, North Yorkshire, where her father ran a music shop. At the age of 13, she gained employment in a religious school where she worked as an English teacher until her retirement at the age of 63. Soon after she married Noel Hughes, a retired army captain, who was nearly 15 years her junior. The couple were married for 40 years until Noel's death in 1979 at the age of 88.

On her 107th birthday in 1984, Hughes received a visit from Queen Elizabeth II. On her 108th birthday in 1985, she was invited for afternoon tea with Prime Minister Margaret Thatcher at 10 Downing Street, and took the express train to London for the first time in her life. Although she was a supporter of the rival Labour Party, Hughes admitted to personally liking Thatcher, and described her as "A very nice woman." Several years later, Thatcher later visited Hughes at her own home.

For her 109th birthday in 1986, Hughes flew on aeroplane for the first time, flying on Concorde over the Bay of Biscay. In 1987, Hughes celebrated her 110th birthday by flying on Concorde to New York, USA. During her trip, she went sightseeing in a Rolls Royce, met mayor Ed Koch, and was interviewed on ABC's Good Morning America.

At the age of 111, Hughes appeared in a BBC television programme about longevity. She attributed her long life to healthy eating and adhering to the Ten Commandments.

Hughes lived in her own home until 1991, when she moved into a nursing home in Redcar, North Yorkshire, after her eyesight began to deteriorate and she became increasingly frail. She spent her final years in a wheelchair, but remained lucid and mentally sharp to the very end of her life. She died on 17 March 1993 at the age of 115 years, 228 days.

Hughes became the oldest British person ever recorded on 26 February 1992, when she surpassed the previous record of 114 years, 208 days set by Anna Eliza Williams. Hughes's record still stands as of 2020; the nearest any British person has come to her age was Annie Jennings who died in 1999 aged 115 years, 8 days.

At the time of her death, Hughes was the second-oldest living person in the world whose age has been validated, after Jeanne Calment. The case of Lucy Hannah, who died four days later, was retroactively 'validated' in 2003 before being retracted in 2020.

Hughes became the last surviving validated person in the world born in 1877 after the death of 114 year-old Ettie Mae Greene on 26 February 1992. Coincidentally, this was the same day she broke the all-time British longevity record.

Hughes as an adult

Hughes at the age of 108, with Prime Minister Margaret Thatcher in 10 Downing Street

Hughes (front, centre) at the age of 109, just before boarding a flight on Concorde 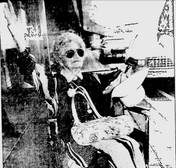