Chen Zhongbo was allegedly born on 18 August 1910 by solar calendar in Sichuan Province, Qing dynasty (China). He had at least one daughter: Chen Surong. He worked as engraver in a banknote printing factory, and after the liberation, he was a plaque maker in the same factory.

At the age of 97, Zhongbo underwent a surgery due to an illness, but the family didn't tell him what he had because they were afraid of his psychological endurance. He was successfully operated, and his illness was cured.

Zhongbo will give his body to the science when he will died; he even called a TV channel to the house he lived with his family in Hongqiao (Shanghai) without telling them it.

In October 2016, Zhongbo was reported to not have any health problems, aside of being a bit hard of hearing. He walks every day in the corridor, and after his family suggested to take him to his native town in Sichuan, he even climbed stairs, saying: "Haven't you said you would take me to Sichuan? How can I go there if I not increase exercise."

In 2017, Zhongbo met with 107 year-old Wu Zhicheng (who would later become a supercentenarian herself). In October 2020, Zhongbo was reported as the second-oldest living man in Shanghai after Tao Ruisheng. 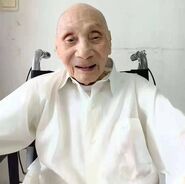 Chen Zhongbo in his supercentenarian years.