Chic Kennedy (7 January 1914 – 19 June 2020) was a British centenarian who was the oldest known living man in Scotland at the time of his death.

Chic Kennedy was born in Dundee, Scotland, UK on 7 January 1914, as one of 11 children of scrap dealer Thomas Marshall Kennedy. When he was three or four years, his younger brother John and his younger sister Lizzie dying from tuberculosis in the same week.

He was a baker during World War II, he worked for Andrew G. Kidd’s who arranged for he to be allowed to forego conscription, and stay at home because he was the only person left in the bakehouse.

He married Betty on 12 September 1942 and had at least two children: Tom, and Ann. The couple lived in Canada for around 30 years after retirement, returning to Dundee around 2012 after their daughter Ann, who lived in Toronto, died. Betty died in August 2018.

On his 105th birthday in 2019, he had one living son Tom (aged 75), six grandchildren, and seven great-grandchildren.

He became the oldest known living man in Scotland following the death of 107-year-old Jimmy Sinclair on 27 May 2020.

Kennedy died at Orchar Nursing Home in Broughty Ferry, Dundee, Scotland, UK on 19 June 2020 at the age of 106 years, 164 days. After his death, Walter Sharp became the oldest man in Scotland.

Chic Kennedy and his wife on their wedding day in 1942. 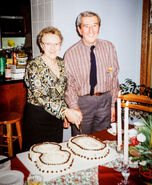 Chic Kennedy with his wife Betty on his 80th birthday.