Christina Backs was born in Holterhoek (a small hamlet in the vicinity of Eibergen), The Netherlands to parents Gerhardus Backs and Johanna Nijrolder on 2 October 1849. Her first husband, Gerrit Jan Startman, whom she had married on 21 September 1888 (coincidentally Geert Adriaans Boomgaard's 100th birthday), died on 27 December 1896 at the age of 65. Almost a year later, she would marry her second husband, Antonius Bernardus Karnebeek, on 11 November 1897. The two of them would spend the rest of their lives together in Holterhoek, where they had a farm. Antonius died in 1922, aged 67.

Towards the end of her own life, Karnebeek-Backs became somewhat of a celebrity in her native country, as no other Dutch woman had yet reached the ages of 108, 109, and 110 before; moreover, at the time of her death, no other woman in The Netherlands was older than 107. On her 110th birthday in 1959, family and press were invited to celebrate the milestone with her, yet Mrs Karnebeek-Backs was already suffering from a cold and hardly spoke a word. She would die five days later, late in the evening, after having been given her last rites.[2] 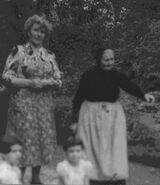