Clara Cedeno [Cedeño] Tello de Saavedra (12 August 1906 – 11 January 2020) was a Panamanian supercentenarian whose age is validated by the Gerontology Research Group. She became the oldest living person in Panama on 6 June 2017, following the death of 113-year-old Bienvenida Vergara Jaen de Cano. She is also the oldest validated person ever from Panama.

Clara Cedeno-Tello was born in Llano Bonito, Herrera Province, Panama on 12 August 1906. She was the daughter of Tomas Cedeno and Manuela Salvadora Tello. She had two older siblings: Miguel Cedeno and Saturnina Cedeno. Cedeno Tello married Elias Saavedra, but never had any children.

Cedeno-Tello became the oldest known living person in Panama on 3 July 2018, following the death of 112-year-old Maria Mercedes Arrocha Graell. Her age was validated by the Gerontology Research Group (GRG) on 10 September 2018, making her the second validated supercentenarian from Panama.

In September 2019, at the age of 113, she was recognized as the oldest voter of Panama, who had voted uninterruptedly in all the elections and consultations from 1994 to 2019. On 13 October 2019, she surpassed the age of Bienvenida Vergara Jaen de Cano (1904-2017), becoming the oldest validated person who ever lived in Panama. 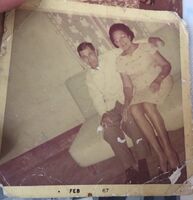 Cedeno Tello with her husband in February 1967. 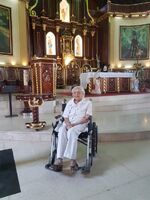 Cedeno Tello on 17 March 2019 while visiting the church where she got married and was baptized.

Cedeno Tello (aged 113) on September 2019 being recognized as oldest voter of Panama.